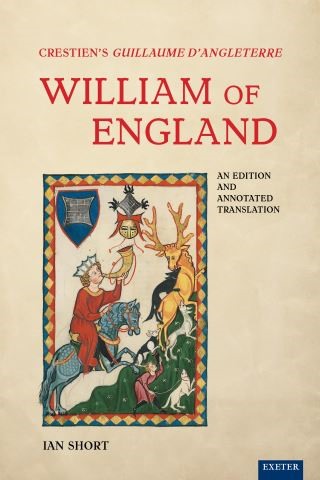 An Edition and Annotated Translation

An edition with facing annotated translation of the 12th-century Medieval French popular romance Guillaume d’Angleterre. The claim to fame of this verse narrative is to have had its authorship attributed (falsely) to Chrétien de Troyes, the most famous of all 12th-century Medieval French narrative poets. This prototypical adventure romance and is representative of a literary genre that has recently seen a renewal of interest among medieval literary critics.

An amusing tale of late twelfth-century social mobility, the romance tells of a bewildering series of adventures that befall a fictitious king who deliberately abandons his royal status to enter the ‘real’ world of knights, wolves, pirates and merchants. He and his family, dispersed by events between Bristol, Galway and Caithness, are finally re-united at Yarmouth thanks to a climactic stag hunt.

The book is designed for students of French, Medieval Studies, Comparative Literature and English, and for all medieval scholars interested in having an English version of a typical medieval adventure romance. It is the first authoritative English translation of this text, and all of its critical material is new.